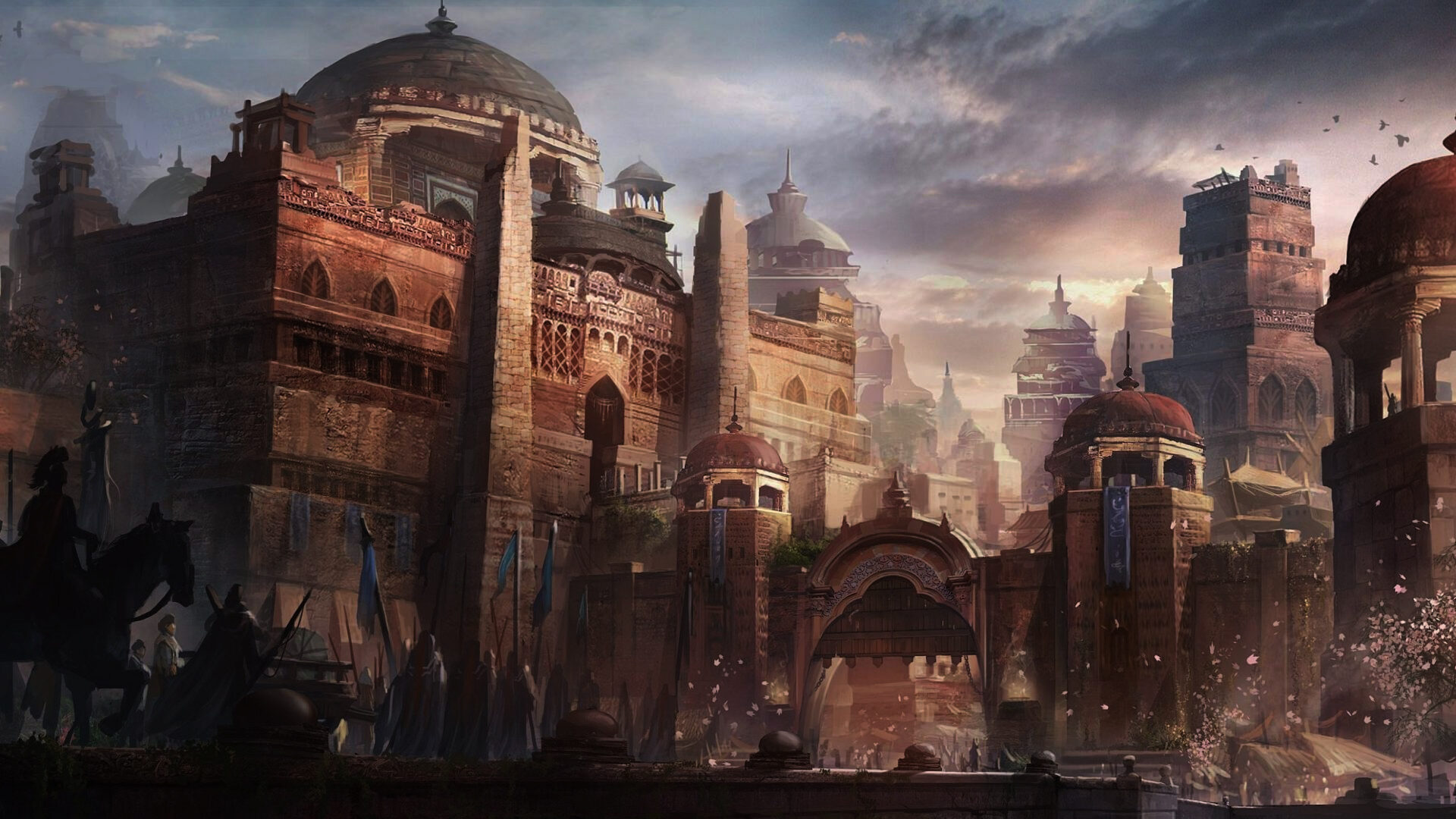 The jewel of the desert

Today is the first of Sarenith, the sixth month of 641 AD on the Imperial Calendar. As usual, the city of Saafhaven is bustling with life. Ships come and go on a non-stop basis, various merchant ships of different sizes and origins moor to trade their goods with local merchants or to store goods and food for the voyage.
Trade caravans enter the city from the Eastern gate. They come from all over the Kingdom and carry a wide variety of products such as, ore from Brill in the north, wood from King’s Cross in the east and wine from Heidelberg in the south.
As the primary trading port of the Kingdom of Dalaria, Saafhaven is one of the most culturally diverse cities. New music movements and fashion often originate in this vibrant and colorful city. The streets of the city are, as usual, filled with a colorful composition of various races. Two dwarves recommend their latest collections of weapons and armor. A group of troubadours consisting of a few elves, people and half-people provides enthusiastic entertainment in the middle of the street.
It is also a city rich in folklore, legends and legends from these diverse cultures. Storytellers can be found in almost every tavern and the largest library in Dalaria is located in Saafhaven. Nevertheless, all this cultural diversity and collection of knowledge remains the primary focus of the city trade and it is mainly gold that is the beating heart of this society.

The adventures of Hazel the Halfling

Oh compassionate Bahamut, peace at last… Although today was innervating, I am feeling drained. This morning started off wonderfully! Ash and I ended up in the same boat (not literally) with two others on a journey to retrieve something. What was it… Riches? A weapon? A maiden? Damn, I should have paid more attention… Anyway, we’ll do it to help a very important Duke and maybe many more with our services! And that’s what Ash and I can do best: right the wrongs together. The colorful human that tagged along seems fine, too! She’s very enthusiastic and has a quick musical mind! I don’t know about the dwarf yet. His beady, cunning eyes betrayed his profession long before he even used one of those nifty fingers. He’s handsome, tho’…

A night of trouble

After we signed up for the Duke’s quest, literally, we partied! Sure, there were some shady figures in dark blue robes with silver suns, but heck, I danced on a table and doused some asshole in mead. It was wonderful! Oldik and I did eventually give in to our curiosity and followed one of those blue robed figures and guess what! Oldik can run faster than I. I saw him leap over the librarian, too; it was impressive. We didn’t catch the shady type, but sure had fun. Luck seemed to smile upon us though, because not very long afterwards we met another one! We caught him snooping around in the dormitory of the tavern and eventually beat him down. I’m not sure Bahamut would have approved, but I definitely smelled injustice. We discovered that ‘he’ was a she! A beautiful elven she! You should have seen our faces when she ranted about some Jewel, a dark tower, great evil, not risking to have the key falling into the Duke’s hands. Something inside me stirred and I was just figuring it out when I heard THE DUKE HIMSELF shout in rage. He was definitely coming our way and we’d not do well if he found us…uh… We weren’t sure either what we were doing. I shouted out some brilliant plan about faking the door was barred and some other nonsense to fool the silly guards and buy the elf some time to escape! We decided she was one of the good guys, after all. The Duke? Mmh, not so much… Well, we sort of nailed it. Except the elf-part: she didn’t make it. We have the jewel though! No way in Heaven he’s going to get to know that. And now I’m going to catch some sleep.

I am writing this while perching atop broad, dark Dragonborn shoulders. Ash and I are now petting and smelling all kind of different, icky looking plants in this absurd shop (even though the shopkeeper said ‘no’, hihi!). I swear Oldik went in here too and although the shop isn’t so big, I haven’t seen him for a while… We’re supposed to stack up on supplies and meet with our colorful bard Shev(nara). Remember I said we weren’t literally in the same boat? Guess what! After gathering everything, we’ll hop aboard a REAL ship. I’m excited! Oh, I think we angered the shopkeeper at last. Will write more later!

A fight on the river

<The following lines are written in shaky, uneven handwriting.>

We made it to the shore, but left the ship blazing behind us. The dark robed ones attacked us. We lost the sword. Everyone is sort of okey. Soaked. I’m so cold. Oldik knows stuff, he leads. Shev tries to cheer us up. We stumble upon a ruin. Anything with shelter and warmth is ok. Found a weird, old piece of fabric and torn papers. Made a fire, will sit and warm first.

Dear diary, I am feeling much better! Oldik thought I slept, but I definitely caught him putting his own blanket over me. I believe his tough, distant attitude is just to protect his very sensitive heart! Right, Bahamut? I thought about your blessing in the temple, too. Ash is bothered by worries about the dark tower and the notable similarities about what she has been told about her past. I heard the others talk about a battle that happened here, long ago. That’s what the fabric is from… Well, whatever happens to be true about her or the tower and all it shelters, we will carry out thy justice upon evil, (maybe) tempered by mercy now and then. When I now gaze outside, it is dark. Something stirs underneath the sands, barely out of sight. I should sleep now, because I want to be ready for what dawn will show us.

Holy Canary, what a morning! While I am stuffing myself, I’m jotting down a quick recap before we set off to the tower. After waking, we saw a caravan on the horizon. It was the Kindling Flames caravan, yay! Remember we saw the sand stir? Right in between our meeting with our beloved caravan, Ash and I saw ugly, screeching four legged mongrels burst from the sands! We worked together and were victorious, of course. We encouraged Oldik and Shevnara to visit Elder Thovna, while Ash and I were invited by Doprax first. The soothsayer let us pull the cards and underlined our sisterhood, but I noticed Ash was still troubled by her growing doubts. Whatever she thinks about herself now, I hope she will still see herself as I see her! We then went to Elder Thovna, where we surprisingly also noticed a figure in a dark robe with a silver sun. My hammer burned on my back as he actually tried to instruct Elder Thovna. Wise, iron willed and a natural leader, was unimpressed and emphasized that she understood his worries about the evil in the tower. She bestowed her trust on us instead and I wasn’t even surprised she seemed to know a lot about the dark tower and the secrets it held. Oh, how I loved to be in her presence again. I find her so inspiring! She is a stern but righteous mother to us all. Our group went out to see Guy and collect anything that could help us and here I am. When walking out of Elder Thovna’s tent, I caught Oldik haggling about something with the robed figure. He seemed unsatisfied. Oh well, after that I thoroughly enjoyed watching Shevnara collect (and consume) some cactus spirit. OH, I gotta run now! The show is about to get started! We’ll travel to the tower, use the jewel (somehow), enter (some way), find the evil wizard Azazel that’s presumable holed up in there (or not) and save Dalaria (most probably)!

It’s over. I mean, not us, but… Argh, so much has happened! Shevnara will probably sing a great song about it. The statues with the disc in command, the codes, dead hands in the sand, the runes of travel and friendship, the beautiful but toxic flowers, our amazing teamwork, those Dragonborn spirits, the love blooming between Oldik and m- <the rest of the sentence is crossed out> I MEAN.  …Dragonborn breeding machines? Ash’s ‘father’ and her two siblings who didn’t survive but were resurrected to beat the life out of us. The idea that someone would use foul means to speed up the holy process of life! Abuse it for his own means, scar a creature for life… I am glad Ash is my sister in arms, not that what her ‘father’ had planned for her. I pity her, for she has a lot to think about. She brought him, the big bad evil, with her. Hear that? She saved his remains from the dying tower. Bahamut give her time, for she shows what you preach: enlightened justice. We return to the caravan now, the tower still crumbling behind us and hopefully burying those terrible secrets with it.

Screw you and all of your horrible work, Azazel von Traphauzen.